It has come to my attention..!

There is a post on Pics for Design Facebook group, written by  Lisa Lisa Carillo who I believe is also known as SoulDesigner.

The exact nature of what has been said is difficult to ascertain as the posters first language is not English, and the post is a little confusing, however from what I can gather, I am being accused of being a member of a yahoo pirate/sharing group.

I categorically state I am not a member of that or any other sharing group,
I do not share tubes or kits.
After further reading of the post and comments over the last few days, I believe what has happened is the yahoo group has shared a link to my blog because I made all my PTU kits free.  This has been
seen and misunderstood by someone, who then made assumptions without even the courtesy of contacting me directly and asking me about it first, and has announced to the world of Facebook, PFD and the PSP world at large, that I am sharing/pirating tubes and/or PTU kits.

Again I categorically state I do not share tubes or kits

I am a trifle annoyed I have been named without any attempt at direct contact from my accusers to ascertain if there is any truth to their suspicions.


UPDATE:  I have had communications with one of the posters and the truth of the matter has now been revealed.
It would appear it was indeed an error, someone in a yahoo illegal sharing group, had shared a link to my blog because I put my PTU kits up for free, and this was misinterpreted as me being a member of the group.

On a more thought provoking note, isnt it strange how a post about gossip and scandal manages to reach 139 people yet a post about giving away free templates for people to use only manages to reach 18. Says a lot about the way people think today, and it makes me very sad. If the psp world wants to keep receiving free stuff to play with, perhaps we should all share the good stuff more and ignore the gossip, its not wonder so many designers either quit or go PTU when there is little to no appreciation for what they give so freely. Just a thought !

Made with the beautiful kit Cuddle Babies from Scrapbookingdom

I was fortunate enough to be gifted this gorgeous kit after friending Deanne on Facebook.  Her and Kaye make the most delightful kits, do be sure to pop by their Etsy store

This is the first time I have made a page layout, being more used to taggers sized
kits and making signature tags, it took me somewhat out of my comfort zone, however
I am fairly pleased with the outcome.  It was made a little easier using a baby photo
of my youngest, who just turned 11 yesterday!!  where does the time go? 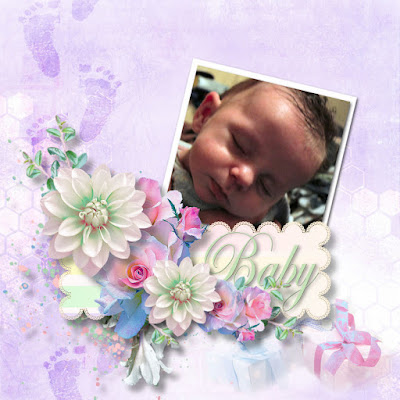 My TOU are very simple
My Designs - Scrapkits, Templates, Masks, Wordart, Tutorials or anything else I make and offer for FREE on my blog(s) are all free to use and Personal Use ONLY.

You MAY use them to make - signature tags, cluster frames, tutorials, email stationery, blog designs and pretty much anything else you want as long as its Personal Use and NOT for monetary gain.
Please don't rip my designs apart, claim them as your own, redistribute through webpages or groups. Tutorial writers please send your readers to my blog to download supplies

Thanks for taking the time to read my TOU.
If there is something I haven't mentioned please assume you have permission as long as its Personal Use and you make NO money from it. There is no need to email/contact me
just have fun!
Please read this note about downloading from 4shared

View my complete profile
MY BLINKIE

My Forum - come join us!